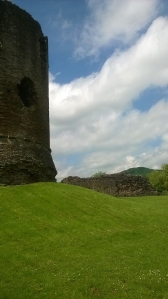 First week of July we took an afternoon trip to Monmouth to collect a part for our camper van (a project Lawrence has a lot of fun with; a massive metal jigsaw) and we drove past a ruined castle. It was called Skenfrith, built in the 13th century. It was a sun filled day and there was no-one around and no charge to get in to look at it. We had it entirely to ourselves. We love castles and can spend hours driving to find them but this one we just stumbled across, which made it more satisfying somehow. We sat on the warm grass and ate out sandwiches, admiring the ruined keep. It was a great castle, with plenty of it still in place to imagine what it must have looked like when it was built.

During the summer holidays we went to Brecon for a week with the family. We were so lucky with the weather and plenty of hot days for walking up all the hills. The cottage we stayed at was on a hill called Buckland and the whole area felt like the Shire, straight out of the Hobbit. One day we drove to Caerphilly Castle (see picture above) and it was very impressive. It was imposing and dramatic, with one tower leaning like it was about to tumble into the moat. However, it was the last day of ‘Cheese Festival’ and the place was packed full of people. I selfishly prefer it when castles are deserted and we can romantically imagine what it used to be like, rather than  stalls selling burgers and plastic swords. The sword fighting recreation people were hilarious though and the kids thought they were wonderful.

This is Crickhowell castle, which was the nearest town to where our holiday cottage was. There was not much of this one left but it was still interesting to walk around. It is in a children’s playground right in the centre of the town.

My favourite castle that we visited during our trip is called Tretower Castle and Court. It was an inspiring place. I wasn’t surprised to read in the guide book that it had been a haunt of poets and musicians during the 15th century: it has a creative, artistic feeling in the curves of the stonework and shape of the windows. The grounds and surrounding landscape is peaceful and lush with trees and grazing sheep. Hills rise on each side, blocking out the rest of the world. There is no furniture in the majority of the court (a small part has been restored to look like the 1450’s and recreates the furnishings) but I really liked the emptiness of the rooms because it directed the eye to the wooden beams and medieval craftsmanship.

‘Among the early owners of Tretower Court are listed Lord Berkeley and the Earl of Pembroke, but probably the most noted link with the house is that of Henry Vaughan, the ‘Silurist’. Henry was a nephew to the owner of Tretower and never actually lived at the house, but history records that he had an intimate association with the property, inspired by the tranquillity of its surrounding environment. As a great poet and distinguished writer, whose works are highly acclaimed among the literature of 17th century England, Henry’s love of the gentle Usk valley and the hauntingly beautiful Black Mountains was captured for eternity by his words.’ Welsh Manor Houses website. 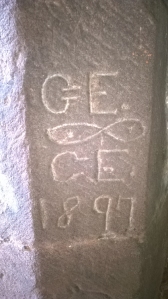 There is a painting in the Great Hall that shows the history of the families that lived at the court. The man with the raised fist in the boat is Jasper Tudor, I think. I only read the information very briefly before I was led into a another part of this absorbing, fascinating place. I didn’t want to read, I just wanted to wander around imagining.

I saw Eternity the other night,

Like a great ring of pure and endless light,

All calm, as it was bright,

And round beneath it, Time in hours, days, years

Like a vast shadow mov’d; in which the world

And all her train were hurl’d.