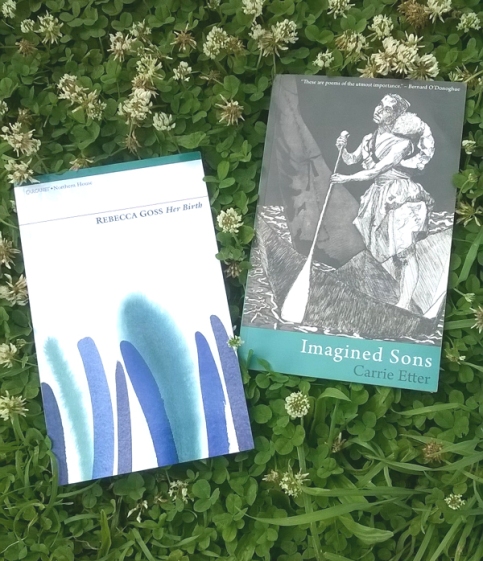 I got both of these books on the same day and I met both of the poets on another same day. Perhaps that is why these two books are linked together in my mind. They are both astonishingly well written. They both made me cry. They both made me think about my own version of loss.The poems led me to a door I don’t open very often, one I have tried to write about but find I can’t. Not yet anyway.

‘The pain of nursing and losing a sick baby inspired the poet to write a collection which has earned her a place on the Forward poetry prize shortlist.’

Rebecca Goss writes in a very clear way; I almost felt like the stunning poems were medical notes as I read them. Not that the poems are devoid of emotion, quite the opposite. The poems are raw, tender and precisely detailed. Careful in the sense that they must be written right, the memory must be preserved accurately like a flower pressed between the pages of a hardback book captures the memory of summer. They are heartbreaking to read but always the life itself shines through, not the death. That and the mother’s steadfast courage and love.

We have her prints.
Hands and feet, pencil grey,
as if they stood her in soot.
A nurse lifted her palms
then soles to the paper.
Underneath, wrote her name,
the date. I wanted her handprint
to come home on sugar paper:
bright yellow, ready for the fridge.
Months later, the sun picked out
her paw on the pane, each tip,
tiny as peas. I peered close,
nose almost touching my fossil,
backlit on the glass.
“Print”  Her Birth by Rebecca Goss (Carcanet, 2013)

‘In Imagined Sons  Carrie Etter has written a book of vivid, heartbreaking poems on the experience of giving up a child for adoption. A prize-winning author, lecturer, critic and popular blogger, Etter imagines the possible destinies for the child and presents us with various scenarios from the tragic to the absurd.’

Carrie Etter uses the catechism form to answer the questions so often casually thrown to women who give up a child for adoption. Between these poems are a series of Imagined Son poems. Each one imagining a meeting with the man he might now be. A glimpse, a conversation, different points of his life. Like dreams they begin unexpectedly in a new setting and end without reunion. It is very unsettling and emotional to read, but like any good book I could not stop, wanting to read another vivid scene. Etter shows the complexity of it all: nothing is simple or black and white. Longing is presented next to reason, emotion next to logic. It is this rich layering that makes the poems so brilliant in my opinion.

My favourite poem from Imagined Sons 13: The Woodcutter