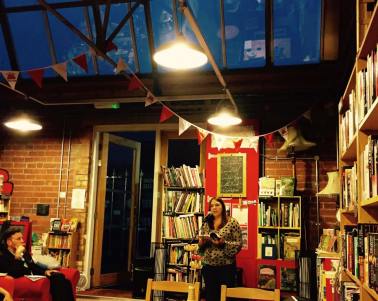 Fire and Dust is organised and hosted by Adam Steiner, who was a charming and dapper MC.

James Grady just blew the room away with his fracking poem, if you get a chance to hear him perform, do it!

I was really glad to hear Leanne Bridgewater: ‘Her work stems from experimentation of word order and unconventional rhyme‘ and her poems were excellent.

Ira Lightman’s Latin umbrella was a memorable end to a set of poems that utilised music and shouting, yes SHOUTING. Unexpected and shook the room up nicely.

Josie Allen’s poems were brilliant, just the kind of poems I love to hear. The last one, Dirty Talk, was really, really good.

Antony Owen is someone I respect a great deal and his new pamphlet, Margaret Thatcher’s Museum is a continuation of his unflinching focus on political and humanitarian issues highlighted through his writing. I especially enjoyed his poem about Hiroshima as it is a subject that should not be forgotten. Enjoyed may not be the right word, I think rather, I was very moved emotionally hearing it.

Finally, Reuben Woolley is someone I have known on facebook for a while and so it was good to meet him in real life. He runs a blog called I am not a silent poet. He read a very powerful set of poems from his new pamphlet, Dying Notes; they were not easy to listen to, but that was the point. Giving voice to the silenced. Challenging themes in sparse, precise images.

I had to miss MCUltra, shame. But it was late and I had to be home before my car turned into a pumpkin.

Thank you to Katy Wareham Morris for the photos and being my poetry buddy.