I was already a fan of Eleanor Rees before I read her third collection Blood Child (Liverpool University Press). She had won my admiration with her second collection Eliza and the Bear (Salt). It was a mesmerising read; dark, bloody, sensual and wild. Rees is a poet who embraces the shape shifting power of border crossing and this is realised even more fully in Blood Child. In the collection routes are above and below, within and without. Rees flits between animal and human, and questions constantly, often without answers, leaving a magnificent ambiguity to her work. I can’t format the  quotes exactly as the text so I can only give an example; the real beauty is in the original text as found in the book below. 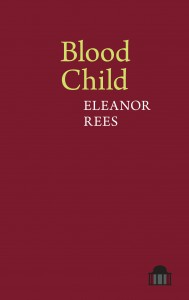 The poem that opens the collection seems to set up Rees’ thoughts on border crossings. A Burial of Sight, begins with the lines,

Sometimes there is another city,

The flowing pattern of the lines, with regular indents creating white space, echoes the flowing imagery that Rees weaves and guides her reader through. She suggests there is another place, just there but not fully realised; ‘splayed out/as you travel/to the other boundary.’ The narrator of the poem is strolling towards a ‘subtle river’ in ‘sun-brown’ dusk. These precise images focus the reader on the moment that is being experienced so they can see the terns or the river even though it is ‘far from here, far over.’ The reader can feel the sea wind that forms ‘an opening’ and the massive implication that suggests; the movement between worlds, between city and countryside, animal and human. Rees writes,

We are above and over,

Our wings also gold and turquoise.

She moves from the dreamy, languid suggestion of flight to the simile and finally embodies it with the metaphor. The uncertain reality, slipping between a feeling of reverie to a definite embracing of the animal (in this case insect) gives power to the narrative. Border crossing allows a discarding of rules and expectations so the landscape can be inhabited and embodied. In the poem Rees slips between light and colour, drawing the light into the lungs, so the narrator sinks into the surrounding environment; ‘meld place to place./ I am shadow./ It is my skin./’

There is a sense of the ancient in this poem, of old gods and mysterious nature powers. Suggested by a personified sun ‘waiting gently for dawn’ and Stone man, ‘hard and persistent’ that draws the ever curious gaze of the poet. One moment the poem is full of light and the gaze is directed upwards and then it descends deep into the ground; ‘I dig for your roots so deeply held,’ seeming to note an archaeological dig, asking, ‘What does it look like underneath?’ The narrator asks questions throughout the poem and following images answer and don’t answer. Here Rees writes,

Pinpricks of light filter through the churned soil.

on a plain, a valley of houses

beneath a heavy winter browning light.

Always the feeling of being in many layered places at once; now, then and future. The present reality intrudes, the built up, man-made interruption. Couples appear on the path, ducks, ‘waddle over tarmac,’ so that, ‘Consciousness is a sharp bite: a hailstorm.’ The poem culminates in an even more ecstatic embracing of the animal border crossing that suggests a longing for the natural. Geese fly above the city park, ‘In the night I am with them,/ solid wings slapping against air currents,/ almost like thoughts,’ and ‘my feathers a sheen of dusk-light.’ Rees uses powerful language ‘big handed’ and ‘huge.’ The animal/human narrator is defiant and exultant above and beyond. The poem ends with strong statements, ‘I skim you. I steal your dreams,’ and ‘I swallow them into the beat of my wings.’ The imagery is playing with the light and the movement between here and there, ‘I fold you into the barrow of air.’ Rees embodies the goose and everything in the landscape, ‘I hold it all here…in the hook of my goose heart.’ It is a remarkable journey poem that questions, focuses, slips between and rises with the goose/human above the landscape which beats with the, ‘Hot goose heart’ and the promise of deeper questioning, ‘I’ll burrow for you.’

I have focused on the opening poem of the collection, but be assured that the rest of the book is equal to the opening. The title poem Blood Child is dark and compelling; Rees utilises a chilling refrain throughout and uses the colour red to paint a mythology of a girl and mother that is returned to in the collection like threads weaving through a tapestry discovered in the earth. Faded, indistinct, wild animals have been living in it leaving their musty smells, but it still has the human story to tell, brutal and dramatic. Rees unpicks the threads and arranges it as stories that have their roots in fairy tale but always one eye is on the modern environment; the layered city and ancient landscape. Cruel mothers, seal skins, bird men; the collection is packed with intriguing re-imaginings. Blue-Black ends the collection, once more soaring above the landscape and looking down with gull’s eyes at the view. This echoes the goose at the beginning and gives a satisfying circular feeling to the collection. It is always the landscape that stands out as I read; it blurs between worlds and the narrators suck in the air, the sand, the earth. They are the landscape and the landscape is them. I haven’t said anything critical. That is because I found the collection to be faultless in both the scope of enquiry and the execution of the poetry.

A vase from the Georgian period detailing the three races of man. An uncomfortable piece of ceramic art which forces the museum visitor to think about the invention of race groupings and the theorizing of racism. Two of the 'races' look down with strained uncomfortable faces, whilst the white man looks up (towards god?). All are chained with minute flowers. There was info with the piece to tell the intention of the artist, supporting or protesting this? A fascinating, confronting piece in the Georgian Era Light and Shade exhibit.
Worcester City Museum and Art Gallery is always thoughtfully curated by a wonderful team. They have a small collection of Native American artefacts which are currently on display, including a magnificent seal gut parka. They have put up poster signage to discuss colonialism, to highlight the Native American voice, and create dialogue about the movement of these items from the tribes to Worcestershire (it was Victorian collector who donated them) and that is such a good approach with a challenging collection. More conversation and reflection on the past is what we need today.
Loved you for ages still thrilling #muse #poetryofinstagram #poetrycommunity #poetry #iursula
When your friend thinks you need a boost... and you find office flowers 😍
Such a relaxing pleasure to drink tea & chat to Charley and Dan for the @tea_biscuits_books_podcast this morning. Tune in soon to hear about my favourite books, favourite biscuit, and the things that influenced my new book of poetry, I, Ursula. #poetrycommunity #poetsofinstagram
I love this book launch photo, taken by the lovely @charleyblogs , because I look like I am gently patting my dear mum on the head 💜 thank you to everyone who came to listen, my incredible guest speakers who voiced the muses, the flowers and kindness. 🌹🌼🌾
%d bloggers like this: