How to Wear Grunge, can be purchased from Knives, Forks and Spoons: follow this LINK.

“Ruth Stacey’s How to Wear Grunge eschews nostalgia and the self-fulfilling mythology of rock’s nearly-famous excesses for a fierce, feminist holler back into the feedback of another place and time, in all its bleached and sticky-carpeted illusions and almost-glory. Between truth or dare narratives that toy with the tension of hard facts – “Too gloomy, tell me about the prettiness again. / No. Tell me the worst thing” – these poems are wild and wise, and faultlessly written. There is a beating rock’ n’ roll heart of riot-grrl rebellion in every line. Stacey is a fearless and utterly compelling writer, whose candid, courageous poetry takes on the prevailing narrative and places women at the very epicentre.”  – Jane Commane

“In How to Wear Grunge, Ruth Stacey has achieved a bittersweet examination of brutal youth and violent love, with expert attention to the timing of acceptance, obsession and revelation. There’s almost a contact-high to these poems, an intoxication that has been carefully crafted to provide relief from the horrors of the past and of each other, creating a deceptively fragile romance of a sub-culture that encouraged the dirt and distortion of the fragmented self. However, once we have questioned the lives of the damaged, haunted souls in this cool as hell collection, what burns through is strength and survival, wounds that gush with the language of dark joy, the sweet stink of dope and incense, a promise (to past, present and future selves) tightly rolled into a joint so full of flavour it will leave your mouth watering. How to Wear Grunge is ultimately a kaleidoscopic questionnaire. There are no right or wrong answers. In the end, we all dance to something. We make noise, we hurt each other and, sometimes, we forgive.”  – Bobby Parker 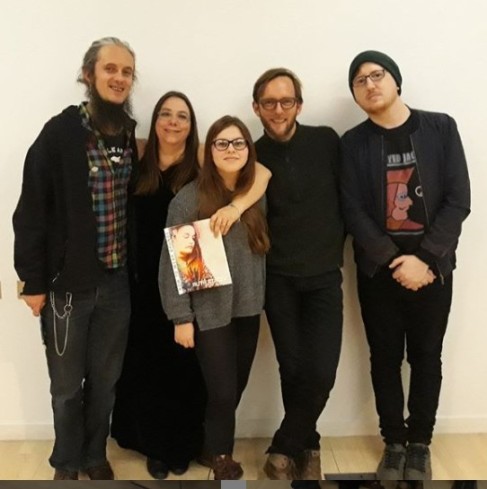 “A different kind of being lost is explored in Ruth Stacey’s sequence How To Wear Grunge. The poems address the story of 20-year-old, Carey Hunter, famous for her death and for being the lover and muse of a rock star. Carey’s story is trailed through a maze of internet links and news stories. Some narrators long to merge their identities with Carey’s; others are fans, friends, commentators or questioners.

This pamphlet could easily be labelled a product of the #MeToo movement, especially since one of the poems in this sequence is included in the recent #MeToo anthology. But this association risks over-simplification. Women have protested against sexual exploitation and coercion for many years; #MeToo is the most recent effective intervention in a long campaign. Moreover Ruth Stacey’s poems deal with more than this, raising uncomfortable questions about the desire to transform the youthful dead into idols of romance which also elevates a damaged and destructive life into some kind of ideal.

Some poems’ titles act as warnings – ‘Be Cynical, Doubt the Stories’, ‘Did That Really Happen?’ – while italicised comments at the foot of the main text are cynically critical, alerting the reader to discrepancies such as Carey’s eye and hair-colour change between accounts, asking critical questions (‘So I can’t trust anything you say?’), or demanding the poems take another path (‘Too gloomy, tell me about the prettiness again. // No. Tell me the worst thing.’)

Carey herself eludes definition, seen through the lens of the narrator’s own varied attitudes, experiences and desires. ‘But I Can’t Look Away’ begins as a series of clichés:

She was so pretty.

She was so unique.

She wore clothes so well.

She had the greatest smile.

She was the love my girl of a talented man.

but ends with the question “Did everything appear as it truly was?”

This is a sequence that taps into current concerns in the way it questions constructions of the past as well as the good faith of those who report on it. It demands re-reading, as if it contained a certain truth – but the versions shimmer before the reader’s eyes. None can be – even in terms of this imagined world – definitively true. The dead central figure remains a means by which the sequence of narrators (and the assumed collator of narratives) use Carey to navigate their own concerns and needs.” Kathy Bell for Under The Radar

” Throughout the collection, Stacey discusses yester years with a tenderness that is sometimes bracing, note the beautiful ‘Chant & Be Happy!’ as an early illustration of this. Stacey opens with: ‘It wasn’t all bad   not like the adverts said’, later adding: ‘realising we had no money left / but still feeling we had our priorities right’. The poem’s closing sentiment – ‘it wasn’t just the drugs that made us / all feel love   suffer   it was each other’ – sets the tone for the blend of nostalgia, pleasure, and bittersweet feeling that resonates throughout this work as a whole.

Another point for commendation must go to Stacey’s distinct but beautiful use of imagery, often creating a delicacy in unexpected places; take ‘So, You Got Your Rock Star Death in the End’ as one such example, with the stunning: ‘She is as precious as a robin’s egg tucked inside an old kettle.’ In among the ever-present grunge feel of the work, these descriptive asides add for a change of tone and a pause for thought which works wonderfully.

How to Wear Grunge succeeds in being an exploration of young identity (‘Who Was She?’), celebrity culture (‘Lecture to Myself’), and indeed rape culture (‘The Worst Thing’); Stacey shies away from nothing, making the collection rich in talking and thinking points, and also making it a book that any reader will surely want to return to. Another marvellous collection from a strong and established poet, Stacey has created something special here and, to borrow from her own ‘Define Poetry’ which features in the book, it seems only right to conclude: ‘This is poetry, for sure’.” Charlotte Barnes for Mad Hatter Reviews

“We’re in a triangle: poet, protagonist, reader. Or: the page, the story, the questions. It’s a pamphlet in three dimensions. This structure allows the reader to argue and criticise and demand answers (‘Who are you talking about: tell me the real truth!’).

By anticipating the reader’s quizzical response, Ruth Stacey holds attention because that attention is an integral part of the poem.‘Such a waste, she was too young to be wasted,’ says the reader, nearing the final poem.” D A Prince for Sphinx Reviews 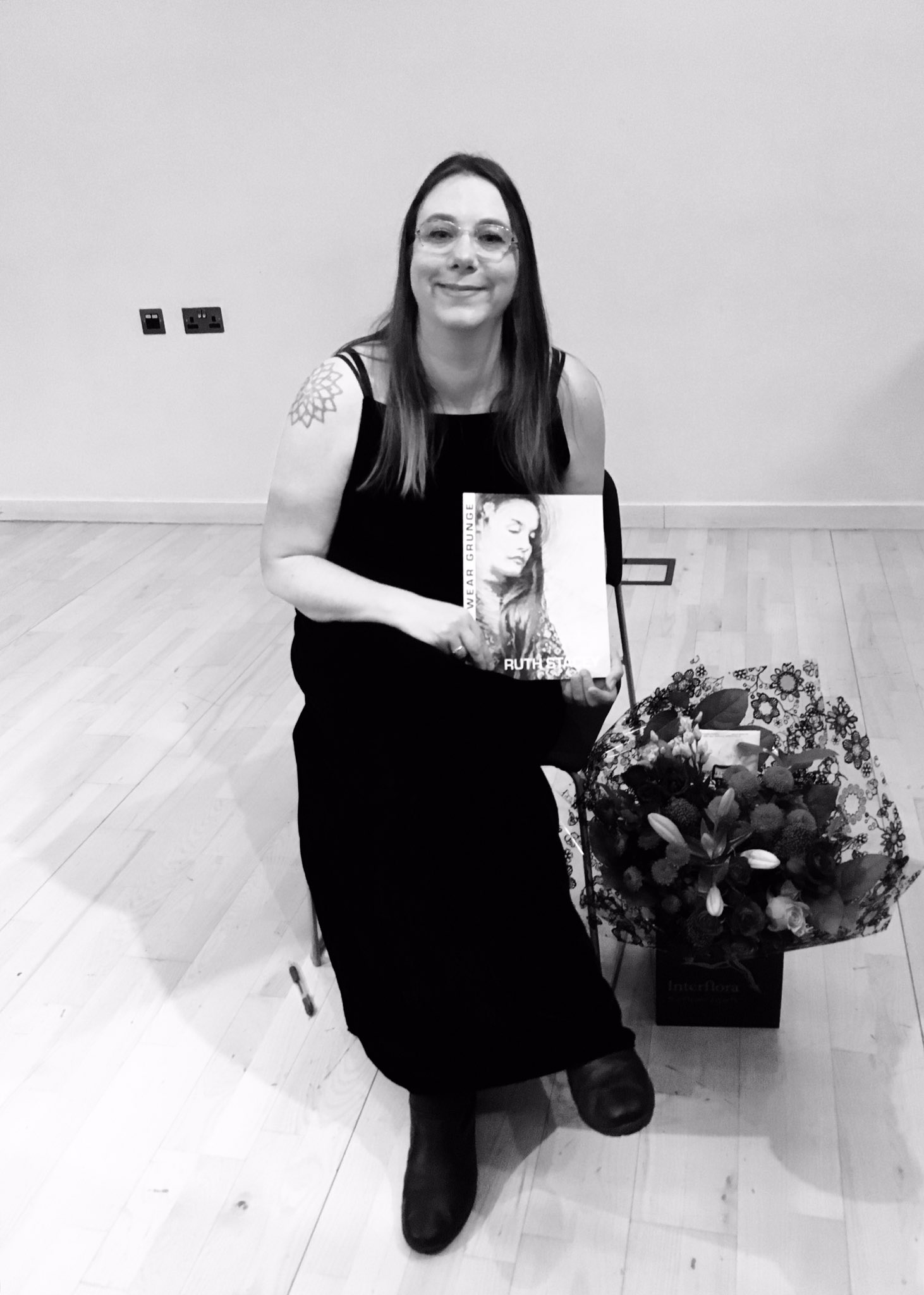 Photo from the the launch of HTWG by Margaret Adkins